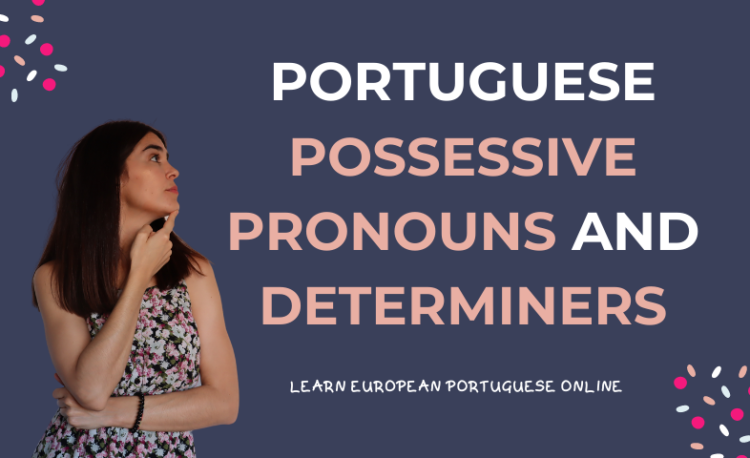 Today’s post addresses one of the seemingly most difficult grammar topics for most learners – the Portuguese Possessive Pronouns and Determiners.

Ok, maybe you do not agree and you think tackling these is easy. However, a lot of my students make mistakes, mainly concerning the use of the article – o, a, os, as – before the pronoun/ determiner.

See, the problem is that this is one of the divergence points between European Portuguese and Brazilian Portuguese, and it is important that those trying to learn the European variant have a clear idea of how to use the possessive pronouns and determiners properly.

So, with no further ado, let’s dive into it!

Possessive Pronouns and Determiners in Portuguese

What are possessive pronouns and determiners?

Put simply, these are words that we use to refer to things that are “possessed” or owned by someone. Imagine you own a car, and you want to refer to it to say its colour. You would use the possessive determiner “my”, as in “My car is black”.

Portuguese also has these kind of little words. They are called Pronomes e Determinantes Possessivos.

Without making it too linguistic and complex, determiners are used before the nouns, in connection with these. In the sentence O meu carro, we have the determiner – O meu – plus the noun – carro.

Pronouns, on the other hand, come without the noun and they substitute it instead. They occur in sentences like – De quem é este carro? É meu! In this case, the pronoun meu is substituting the noun carro. Therefore, it comes alone, unlike the determiners, and normally without the article. We understand the noun we are referring to, because it comes from context.

If you were paying attention so far, you have already found out that the English version of the possessive determiner has one word and the Portuguese two. This is because in European Portuguese, we are obliged to put the article – in the case above the word o – and the pronoun – meu – together when using a determiner. Be aware that this is the case for European Portuguese, not all variants of Portuguese. Take a look at the next section.

However, in European Portuguese, when using determiners, we always select the article that corresponds to the noun we are referring to. If the noun is masculine sinular, we use o, like in the example. If the word is feminine singular, we use a. If the nouns are plural we use os or as, depending on whether they are masculine or feminine, respectively.

So, if we were to translate word by word the sentence above – O meu carro é preto – we would end up with “The my car is black”. Obviously, we are not supposed to translate it literally, so do not get scared. I just want you to understand why and how we use the article.

In Brazilian, somehow along the way, the article was lost. In Portugal, however, using the article in sentences like the ones above is imperative. Many of my students make the mistake to leave it out, but it is important to correct this if you want to sound more Portuguese than Brazilian.

However, since the third person singular – você, ele and ela – and the third person plural – eles and elas – have the same kind of pronouns, sometimes it might get confusing about exactly who we are talking about.

To tackle this, we came up with four different pronouns/determiners that make things clearer. Check them out:

If you focus on the words in bold, you see that we substituted the rows for the third person singular and plural.

This means that if you want to say something like “His car is black” in Portuguese, you can either say O seu carro é preto or O carro dele é preto.

This means that if the car belonged to a woman, we would have to either say O seu carro é preto (O seu referring to the car – masculine singular) or O carro dela é preto (dela referring to her – ela – thus feminine singular).

The other difference between them is that the possessive determiners o seu/ a sua/ os seus/ as suas come before the noun, while dele/ dela/ deles/ delas come after. The pronoun forms both come in place of the noun.

Before I go, I would like to give you some examples, to try and make things clearer, as I know that this is not so straight-forward as other things.

If you arrived to this point, congratulations! I know it is not always easy to keep reading, especially if the path is so bumpy and difficult to overcome as the Portuguese Possessive Pronouns and Determiners may be.

However, my advice is to not give up! If you are tired now and still did not fully understand the world of the possessives, maybe give it a rest and come back later to go over it again.

When you do so, also try to solve the exercises below. They might further help you.

Most of all, do not forget to have fun while learning Portuguese!

Fill in the blanks:

Find the pdf and the solutions here.