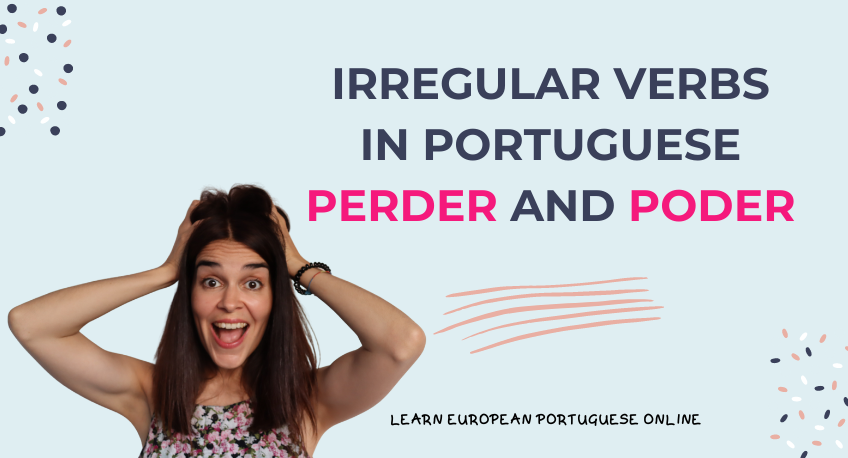 Today I will continue with the Irregular Verbs in Portuguese – this time with the verbs PERDER and PODER.

These two verbs are part of the list of the Most Used Portuguese Verbs and therefore I find it very important that you know how to conjugate them and what they mean.

Use of the verb PERDER

We use this verb for different things. In fact, we can translate PERDER as “to lose” something, but also as “to miss”. Look at the following examples:

Besides these two meanings, we also use PERDER in some idiomatic expressions:

Perder a cabeça – Literally it means “to lose your head”; something like “to loose your mind”.

Perder a vergonha – Literally, “to lose shame”; we use it when we want to say that someone is not/ should not be ashamed of something anymore.

As you can see, this verb has a lot of different meanings and uses and it is important that you know how to conjugate it.

This verb, as you might have noticed, is pretty regular in the Present Form. The only thing that makes it irregular is the first person singular – Eu perco. In this person, the “d” of the infinitive – PERDER – becomes a “c”, which changes the word considerably.

The rest of the persons, however, keep the “d” from the infinitive form and adopt a regular conjugation.

Use of the verb PODER

The verb PODER means “can” or “to be allowed” in Portuguese. In fact, this verb brings a lot of confusion to my students and they end up using it as CONSEGUIR.

In fact, if we want to translate it into English, we should really think of it as “to be allowed to”, as we use it normally to express this idea. Take a look at the following examples:

Poder sair – To be allowed to go out.

Poder comer no autocarro – To be allowed to eat in the bus.

Não poder tirar fotografias – Not be allowed to take pictures in the bus.

This should not be confused with the following examples:

Conseguir sair – To be able to go out.

Conseguir comer no autocarro – To be able to eat in the bus.

Conseguir tirar fotografias – To be able to take pictures.

CONSEGUIR is used to express a different kind of idea than PODER.

If you want to know more about this (and also the difference between other closely related verbs like CONHECER and ENCONTRAR, for example, take a look at my European Portuguese Online Course where I explain this and many other interesting things).

PODER, as PERDER, is pretty much regular, except for the first person singular – Eu posso. In this case, the infinitive is not maintained at all and the word is completely irregular. The rest of the persons, however, follow the regular form of the verbs ending in “er”.

The verbs PERDER and PODER in context

The following sentences are examples to help you see the verbs in context.

These exercises are meant to help you practice what you have learnt. You will be able to find the pdf version , as well as the solutions here.

The verbs discussed today are very useful and you should learn them and use them as much as you can, in order to practice them in context! Pay attention to the conversations around you and check if you can spot them when other people are speaking Portuguese. Don’t forget to check the other irregular verbs – like IR and VIR, TER and DAR, HAVER, DIZER and FAZER, or OUVIR and PEDIR, for example.

If you have flashcards, do not forget to add these verbs and their conjugations and check them until you know them by heart.

Let me know in the comments below how many answers you got right and please do not hesitate to ask any questions or make any suggestions!