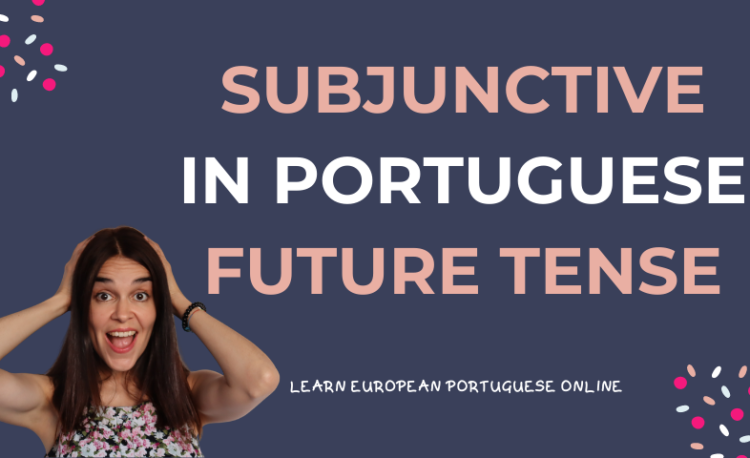 In my past articles I focused on the Subjunctive in Portuguese and all its nuances. In today’s post I will also speak about this verb mood, but this time I will be covering the Future tense.

As you may already know, the subjunctive mood is used very often in Portuguese (unlike what I have heard some people say) when we want to give an opinion, show doubts, express concerns, etc and each tense has a different meaning.

While the Present Subjunctive refers to things that are sure to happen and the Imperfect refers to very unlikely or impossible things, the Future Subjunctive is used mainly to speak about situations we know are very possible and even likely to happen, but we do not know when or where exactly they will take place.

Let me give you an example. When you say, in English “When you go home, tell your mother I have her keys”, you are just using the Present Tense.

Go to the third person plural of Pretérito Perfeito do Indicativo and take out the ending “am” (Be aware it is not like in Imperfeito do Conjuntivo, where you take “ram”).

Look at the examples, for each conjugation:

Be aware that while with the regular verbs, Futuro do Conjuntivo forms are similar to Infinitivo Pessoal, with irregular verbs that does not happen.

When you are in doubt whether a verb is in Infinitivo Pessoal (IP) or Futuro do Conjuntivo (FC), you just have to check with an irregular verb, as they are different. So, if you have the sentence:

And you are questioning yourself whether it is IP or FC just change the verb and make the test:

Here you already can see it is not IP, because the IP of dar is dar as well, and not der.

1.With “If” to talk about something possible or probable to happen

Se eu for ao cinema, vou comprar pipocas. (It is likely that I am going to the cinema, or at least possible, and if so, I will eat popcorn).

The main sentence can come in:

Presente do Indicativo – when we are speaking informally;

Futuro do Indicativo – when we want to be more formal;

Imperativo – when we want to give an order, make a recommendation or ask for something.

2.With certain expressions of time

****These expressions can be used with Presente do Conjuntivo too, but when used with Futuro do Conjuntivo, they represent something that it is more likely or possible to happen

**** We can also use these expressions with Indicativo, when we are speaking about actions that are usual or that already happened.

3. Sentences with relative pronouns, when we want to speak about a possibility in the future

4 – With repetition of the verb, to reinforce an idea

****Literally translated it would be something like “Do as he does” or “Come whoever comes”.

So, what do you think about the Future Subjunctive in Portuguese? Is it difficult, is it easy to understand?

Be as it may, I hope you found my explanations useful and that they can help you tackle this verb mood.

Please leave a comment below so I know how you are doing with the Subjunctive in Portuguese!

Also, do not forget to have fun while learning!