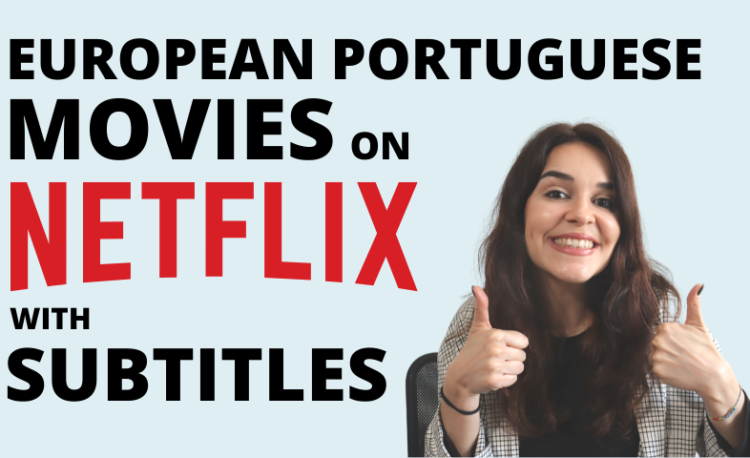 Hello! In today’s post I’m going to tell you about 5 European Portuguese Movies On Netflix, which have subtitles. Some contain Portuguese subtitles, others Portuguese and English subtitles.

I also created a YouTube video about this topic, which you can find here:

Make sure to subscribe to my YouTube channel and turn on the notifications, so you will be informed about new videos 🙂

Now, let’s go on to our Portuguese movies. Although there isn’t much on offer, you can still find Portuguese films on Netflix.

I searched and I found some!

The first movie I want to talk to you about is “Os Maias” (family name). This film is based on a literary work. This novel was written by Eça de Queirós, a great Portuguese author of the 19th century. It tells the story of a rather tragic romance. If you like this kind of stories, this might be a good movie for you. It will also help you learn a little more about Portuguese literature.

Another movie that will premiere now in June is “O Pátio das Cantigas”. This movie is a modern version of an older Portuguese movie from the 40s. It’s really, really funny, so if you like comedy movies, this is a good option.

Another comedy film, also based on an older film from the 1930s, and which will also premiere on Netflix in June is “A Canção de Lisboa”. Don’t forget to put a reminder on your phone. This is a good movie for a cosy Sunday afternoon.

For those who like football (and even for those who don’t, but want to learn Portuguese), there’s a movie… well, it’s not really a movie, but more of a documentary, called “Ronaldo” and it’s about Cristiano Ronaldo’s life and career.

Considered one of the best football players in the world, this prodigy born in Madeira, Portugal, tells us some of his adventures through the world of football and beyond.

This documentary is very interesting for anyone who wants to learn Portuguese, because it comes with subtitles in several languages. Not only Portuguese and English, but also Finnish, Japanese and much more… you just have to go and see and choose what is most interesting for you.

I just wanted to share a short update about five more Portuguese movies that are available on Netflix at the moment (November 2022). You can read all about it in my article here.

Finally, I’d like to invite you to the Netflix kids’ area. I chose a movie from there because these are usually easier and simpler. Therefore, for those who are starting their learning journey, movies and series for children can be very useful.

I selected “Sponge Bob” because I found it can be dubbed in Portuguese and has Portuguese subtitles as well. But there are many more series and movies you can see in this area dedicated to children. And you can learn a lot!

Sometimes the subtitles are not 100% correct, but even so, they will be a big help. Sometimes they are synonymous of whatever is being said. For example, instead of “divertidos” (“fun”), something like “engraçados” (“funny”) or similar will appear.

There is also a very useful extension for those who are learning Portuguese or any other language, which I will talk about in another video that I will make shortly.

I hope you have fun watching these movies and that you learn a lot of Portuguese!

Tell me, do you usually use movies and series to learn Portuguese or any other language?

Beijinho and see you next time!