Home>Blog>Vocabulary>3 Portuguese Words Without Translation In Other Languages 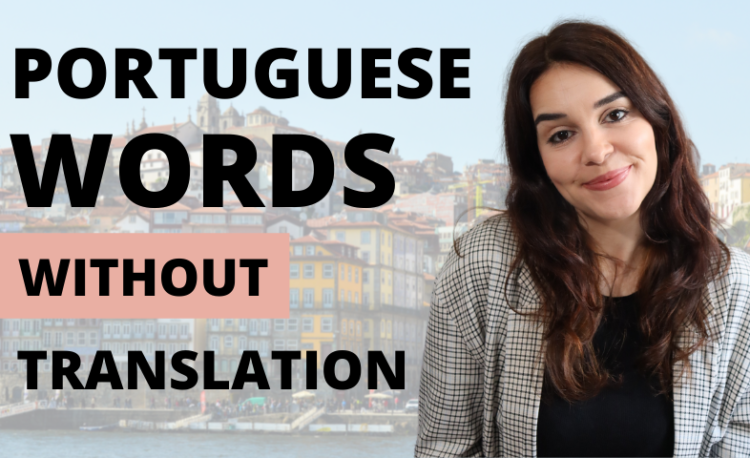 Hello! Did you know that there are some Portuguese words that can’t be translated? Today I’m going to show you 3 Portuguese Words Without Translation.

I also made a YouTube video about this topic, which you can check out here:

A few years ago, there was a study that found some words from various languages ​​that have no translation. This list also contained some Portuguese words.

This word is related to a feeling of nostalgia when we are away from someone or some place. For example, I say EU TENHO SAUDADES TUAS when I am away from my boyfriend or family. I will say this when I miss these people.

But I can also miss a place. When I lived in Holland, I missed Porto and Portugal many times.

Sometimes we even miss a time in our lives. For example, as I am a nostalgic person, I miss my childhood and adolescence. Thinking about the good times I spent around that time of my life makes me miss it.

In English, there is no specific word that designates this extremely Portuguese feeling. But if we tried to translate it, we could say something like TO LONG FOR SOMETHING…

However, it does not seem to me that this translation captures the true meaning of the word. If you really want to feel a little bit of what SAUDADE is, you can listen to FADO, a type of typically Portuguese music, which talks about this very Portuguese feeling!

I think this word is very funny! If, on the one hand, the Portuguese are a nostalgic bunch who like fado, on the other hand, we also really like to DESBUNDAR.

This word is actually a verb, which means something like enjoying the moment to the fullest and having a lot of fun. When it’s possible to go to parties again, I’m definitely going to DESBUNDAR!

I think this is actually the most Portuguese word ever! It comes from the verb DESENRASCAR, which is also 100% Portuguese. DESENRASCAR is to solve a problem in the quickest and most ingenious way we can find, even though it may not be the most correct or traditional way to solve the problem.

For example, the other day a shelf I had here at home fell down. My boyfriend, instead of drilling holes again to put it back on the wall, used black tape to hold the shelf instead. It worked, so he managed the problem or one could say he pulled a DESENRASCANÇO.

I wasn’t too happy with the result, but I had to admit he’s turning out to be a real TUGA (short for Portuguese) ahah. He’s german. If you want to see a video of him speaking in Portuguese, check out this video here.

And that’s it, these are the Portuguese words that the study revealed have no translation into other languages.

Did you already know them?

Let me know in the comments below and write a sentence with any one (or all three) of these words.

In case you want to check out more European Portuguese words, you can check out this blog post here.