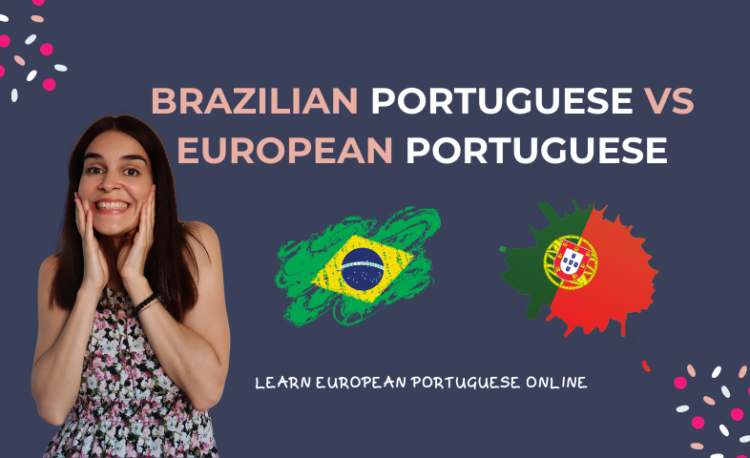 Along the years, many students of mine have been asking me what are the main differences between Brazilian Portuguese vs European Portuguese.

Today I am going to try to answer this question in the most accurately way possible, trying not to step in anyones´ toes.

First and foremost, the main difference is that Brazilian Portuguese may sound to many people as a far more cheerful language than European Portuguese.

In fact, I am not sure if we are sadder than the Brazilian people or not (we do have the Fado, though, while they have the Samba, so maybe there is some truth behind it…).

And here is the video about differences in pronunciation:

It’s all about the sounds of the language

A funny thing that happens frequently is that people who do not know European Portuguese often think the Portuguese way of speaking resembles the Russian language and this has to do in part with the richness of our phonetics (sounds). In fact, as I normally say, we can produce sounds that go from our throat up unspeectil the top of our nose, passing all the places in between (Russian is also this way, and hence the confusion!).

Therefore, while our neighbour romance language speakers (speakers of Spanish, Italian, French) show in general some difficulties to speak other languages, we seem to perform quite well at it. I am not bragging, in all honesty. We only speak other idioms with ease, because as I already pointed out we have the luck to have a richness of sounds that other languages don’t (and, to be honest, we really like to please others, so that might be another reason..).

But yes, this leads us back to European Portuguese vs Brazilian Portuguese. If you hear a Brazilian man speaking with a Portuguese one, you might at first think that they are talking in complete different dialects – while the Brazilian man will open his mouth and say all the vowels in a sounding way, the Portuguese will seem a bit sadder or at least more shy in the way he is pronouncing his vowels.

This peculiarity (the fact that European Portuguese speakers “eat” their vowels), is another reason why we sound so different from the other Romance languages and the Brazilian variant, which are more closely related to each other in terms of pronunciation.

In addition, some of the words are totally different or have a totally different meaning, but that is not a problem for the Brazilians and Portuguese to understand each other. Think of it as more or less the difference that you would encounter between British English and American English.

But let´s take a look at these and other differences in more detail.

Brazilian vs European Portuguese Pronunciation |Are there any differences?

ex: Excelente –> “Eshcilentshi” (not only are all the vowels read, but they are also sometimes transformed into something more sonorant; in this case the last “e” becomes an “i”);

ex: Excelente –> “Shelent” (The first vowel totally disappears, as well as the last one, which makes the word sound very different from its original spelling).

Many other examples of this phenomenon called “vowel reduction” or “epenthetic vowels” in the world of linguistics can be found in the European Portuguese variant of the language, but this phenomenon is hardly existent in Brazilian. This may look like a minor difference, but in fact this is the main difference why both types of Portuguese sound so distinct.

Other differences in pronunciation

Unlike BP, EP does not insert anything in the pronunciation of this set of letters, but on the other hand, it deletes some of the vowels at the end, because of the phenomenon of “vowel reduction” that I explained above.

Let me show you some words!

There are many more words that are slightly or completely different in BP and EP, and if you want to know more, I will be providing a list of words in a later post.

If you want any specific word, you can also just ask in the comments below.

What are the differences in Grammar?

ex: Estou falando –> I am speaking

Estou comendo –> I am eating

Estou indo –> I am going

The Portuguese do not use the gerund very often. Some literary texts have it and some areas of Portugal (like Alentejo – for more infos on this area, please keep checking my “Culture” page) use it more. However, the continuous tense is normally built in the following way:

ex: Estou a falar –> I am speaking

Estou a comer –> I am eating

If you read this text with attention, you saw that the Brazilian variant discussed above does not appear on the Portuguese variant, and this is because it is not correct to ask “O que você disse” or any other variations of this sentence, keeping the normal order of the sentence without hiding the subject or adding the clitic “é que”.

Thus, this part of asking questions might bring you a lot of questions too (see the irony?). If this is the case, or if you didn’t understand something, please leave me a note below or write me an email. This applies also to any other question you might have.

I have another YouTube video where I am speaking with a Brazilian teacher about the differences between both variants of the language. Check it out here:

There are quite some differences between European Portuguese and Brazilian Portuguese, but at the end of the day and after getting used to the different variations of sounds, we all understand each other.

I think this will also happen to you, once you get more familiar with this amazing and rich language and all its curiosities.

If you want to start learning Portuguese in a relaxed and structured way make sure to check out my European Portuguese Master Course.

Do you know any other words that are different between Brazilian Portuguese and Portuguese spoken in Portugal? Let me know in the comment section below. 🙂

I will leave you for today but I will be more than happy to respond to any further questions you may have about this or other topics and to hear about the progress you are making with your learning process.

See you soon and beijinhos,