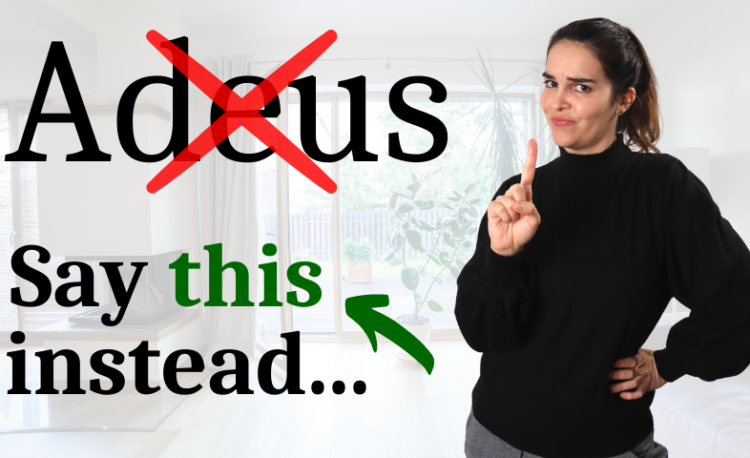 Então? Tudo bem? Do you know how to say goodbye in Portuguese like a real native? If you don’t know, but want to, don’t leave, don’t say “adeus” yet!

Yes, saying “adeus” can also be a good way to say goodbye, but actually it’s not the most common way of saying goodbye for a Portuguese man or a Portuguese woman. Actually, I rarely use this word!

Instead, I use other words and expressions that are more colloquial, meaning they are more informal. This is when I talk to friends and family, of course.

In more informal situations, do you understand?

I think it’s super important that you also learn these more informal ways of saying goodbye, as this will help you learn the language as a whole, so let’s get to them!

You can watch this topic also on my YouTube channel:

18 SLANG Words for GOODBYE in Portuguese

Taking the word “Adeus”, but adding a “inho” at the end, we transformed this form of farewell into something much more informal.

This “inho” is used a lot in Portuguese. This turns the words into something smaller, fluffier or sometimes less important.

For example, when we say “homenzinho, we are diminishing the image of the man we are talking about a little bit – either because of his character or because of his life situation… but that would be a topic for another article!

In the case of “adeusinho”, we are making the word sweeter, more familiar, I would say…

Another way to say goodbye is using the word “xau” or “chau”. This is the most common way of using this word. However, we also make transformations to make it even more informal.

For that, we can:

Duplicate it and say:

The Portuguese have this strange habit of doubling words.

Or, if we are in a really informal environment, usually with friends… we can say:

This means “bye there”, if we were to translate freely and literally into English. It’s like when in English, we hear someone say “Oh, hello there”.

Here it looks like we’re doubling the goodbyes. As if it were “one xau”, “two xauzes”.

Again the diminutive, making everything sweeter and nicer.

Now, if we look at other ways of saying that we are leaving, we also find the expression: “Vou-me embora”. From this expression comes this more informal one here:

As you can see, we’ve cut the “embora”, which makes the expression much more colloquial. A word to the wise is enough!

Another expression that belongs more or less to the same “family” is:

This comes from “I’m on the go (going away)”. You can’t really explain it one hundred percent, but it’s something like “I’m in the leaving mood” or “I’m leaving”. We took it, cut a little bit and ended up with “Tou no ir”.

The three colloquial ways of saying goodbye in Portuguese that follow are very funny. And to be honest, I don’t know if they are mostly used here in Porto and surroundings. However, I have to talk about them, because in my generation (at least), a lot of people use them. They are:

I can’t translate them. They all mean “I’m leaving”, but in a colloquial way.

An interesting thing to pay attention to is that the last sentence “Vou-me pirar” has to contain the reflexive “me”, because otherwise it will mean something completely different.

In fact, if you just say “Vou pirar”, that means “you’re going to go crazy”, or that “you’re going to lose your mind”. So, as you can see, a “me” can make all the difference in terms of meaning.

Then we have this expression:

“Fui” means that we are no longer there, that we are gone. I know, actually we aren’t, but that’s our intention! So we say it this way to make this very clear!

To say goodbye “normally” (not in a colloquial way), we can also say “Até logo”, or “Até já”, or “Até amanhã” or “Até qualquer dia”, for example.

Depending on what we mean, and when we plan to see the other person, we can use one of these expressions.

However, when we are in more informal environments, with friends or acquaintances or even family, we can reduce the expressions and say:

Notice that we cut the word “Até”, saying “Té” and in “See you tomorrow”, we also cut the second word and just say “Té manhã”

If we want to further reduce these expressions, we can also simply say:

I think this expression comes from Brazil, because I think it is used a lot there! If someone from Brazil is reading this blog post and wants to tell me if I’m right or wrong, leave a comment below 🙂

Lastly, one of my favorites:

You will hear this a lot, if you come to Portugal!

The first part “continuação” can even be used in more formal contexts. In other words, we can even use it with people we don’t know very well. However, if we add “saúdinha”, then, in this way, we already make the expression more informal and I advise you to use it with people who you know well.

This expression comes from the phrase “Continuation of a good day”. Furthermore, “Saúdinha” comes from “Saúde” and means that we wish health to the other person.

There, people. I hope you enjoyed it and that you implement this new wisdom in your daily life.

How can you learn more about the Portuguese language?

If you want to know more about Portuguese from Portugal, don’t forget to go check this webinar about the four secrets to learn Portuguese effectively and in a short time.

For now I send you “beijinhos” and see you in the next video!