Home>Blog>Grammar>THERE IS in Portuguese – The use of HAVER 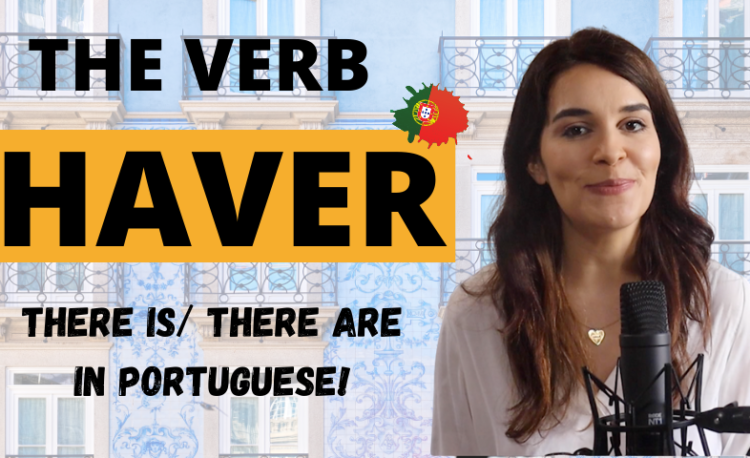 Hello everyone! Today I will be helping you with the verb HAVER. If you want to know how to say THERE IS in Portuguese, you have come to the right place!

Stay until the end, so you get the exercise you need to test your knowledge on this verb.

You can also watch this topic on my YouTube channel:

The verb HAVER is a bit different, since you don’t really conjugate it in all the persons, like you do with most other verbs. I mean, in fact you CAN do it, and you will do it in certain contexts, but one of the most common ways we use this verb is as follows:

USE OF HAVER – IN THE THIRD PERSON SINGULAR OF THE PRESENT SIMPLE:

We use this verb in the third person singular of the present simple, to say the Portuguese equivalent to “there is” or “there are”.

Take a look at the English sentence:

There is a man waiting outside.

In Portuguese, we would say:

In the same way, if we wanted to translate the following sentence:

There are many chairs in this room.

Now, I would like you to pay attention to three things.

So, “há” would most probably give way to “tem”. So, instead of the verb HAVER, Brazilian Portuguese speakers would most likely use the verb TER.

Then, I would like you to check the difference between the use of the verb in English and in Portuguese.

In English you have two ways for marking the singular and the plural of the sentence. What do I mean by this?

In English, if you have a singular sentence you will say:

On the other hand, if you have a plural sentence, you will say:

In European Portuguese, you will not be using singular vs plural. Instead, you will use “há” for both singular and plural sentences:

Another thing I would like you to notice is that in some cases, we can substitute the verb HAVER for the verb ESTAR in the present simple.

In that case, we will say:

Pay attention that if you do substitute the verb HAVER for the verb ESTAR, you will then have to use the singular and plural of the verb… you no longer can use only the singular.

However, you can do it if your focus is not on the placement of the thing/person, but rather on its existence.

In that case, you have to stick to the verb HAVER.

Take a look at the following sentence:

In this sentence, we are putting the focus on the fact that there is fruit today. You can find fruit today because it exists and you can buy it or eat it.

This means that “there are a lot of people who like fruit”. Again, we are not focusing on the place, on where these people are, but we are focusing on their existence.

So, you could go even as far as to substitute HAVER for the verb EXISTIR.

Now, if you were to change the sentence slightly to focus on the placement instead of existence, as in:

Which would translate as “There are many people that like fruit on that room”.

You could already change it to

Because you changed the focus from existence to placement.

I hope this makes sense!

Now, as said at the beginning of the video, let’s test your knowledge.

If you want to know more about this topic, don’t forget to enrol in one of my courses. You can start now with my FREE course: Kickstart Your Portuguese – The Basics.

I hope to see you in another article soon!