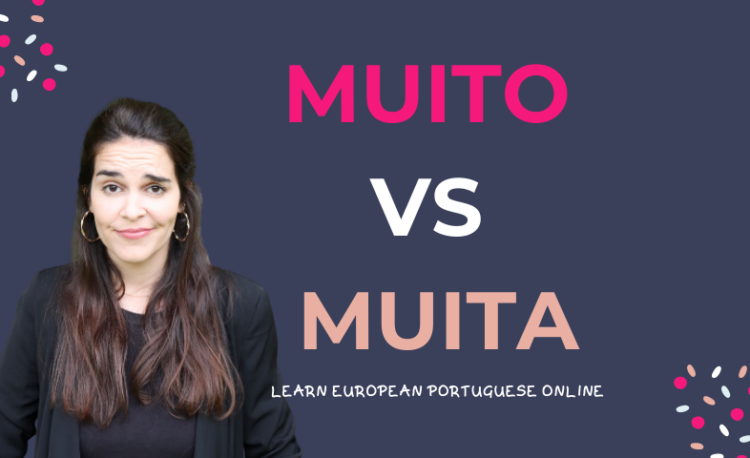 In this post I am going to tackle one of the questions that I constantly get from my students: how do I use muito in Portuguese?

You see, people learning Portuguese get confused whether to keep the word as is, i.e., whether to use it just as muito – or if they need to change it into muita or something else.

If you are someone that feels uneasy with the following sentences, then continue reading:

Confusing? Come with me 🙂

You can also watch this topic on YouTube. Check out my video here:

How to use Muito in Portuguese

So, first things first. Muito can mean very or a lot.

To help you understand what you have to do, you have two different ways (at least!):

Of course, I could give you the more technical explanation, but as long as you know these two rules, you will be alright 🙂

So, let me give you some examples!

When the word muito is followed by an adjective

Take a look at the words – bom, bonita, simpáticos and barulhentas. They are all adjectives and although they change according to the nouns (O vinho; A menina; Eles; As crianças, respectively), the word muito does not.

If you think about the literal translation into English, you see that all the muito words were translated as very.

Thus, you know that this version of muito will not vary (no matter how much the surrounding words do).

When the word muito is followed by a noun

Take a look at the words – garrafas, energia, sapatos and amigas. They are all nouns and the word muito is going to change according to them.

In that case, you have to remember the four variations of the word:

If you have a noun that is masculine singular, you will use muito:

If you have a noun that is feminine singular, you will use muita:

If you have a noun that is masculine plural, you will use muitos:

If you have a noun that is feminine singular, you will use muitas:

If you think about the literal translation into English, you see that all the muito words in this case were translated as a lot or many.

Thus, you know that this version of muito will vary according to the nouns that follow.

The colloquial use of the word muito – an exception

Although the rules above are the ones that apply and the ones that are correct, you probably already know that native speakers like and tend to bend those rules now and then.

In the region of Lisbon, this happens with the use of the word muito.

Although with adjectives the word does not normally vary, Lisbon people tend to make an exception and they will transform the word muito into muita, as follows:

So, as you can see, although according to the norm, muito should stay as muito, in slang muito will become muita.

Bear in mind, however, that no other variations are used (so no muitos nor muitas).

The word becomes muita and it stays that way across all examples.

Again, this is slang and it is not the norm, but I think it is important to know these little peculiarities, if you want to become completely fluent in Portuguese 🙂

If you are in the region of Lisbon, you will likely hear it, so keep your ears open 🙂

Some substitutes for the word muito in Portuguese

Although using muito is fine and correct, we do have some substitutes for this word.

Below you can see a list of “official” words and also slang words that we can use as synonyms of the word muito.

Deveras – This one is really formal, but you can use it.
Bastante – That could translate as pretty, as in pretty nice
Extremamente – This word means something like extremely, so you could argue that it means something even greater that simply saying muito

Bué – This is the first slang word, and it means very
Tótil – The same as bué
Montes – The literal meaning is mounts, but in the area of Lisbon it is also used as very, when followed by de – Ele é montes de giro.

Muito as a lot/ many:

The word muito can be a bit tricky to use, but if you follow the rules I explained above, you will get it right!

I would like you to write me a message below, using the word muito, so I can check whether you know how to use it now 🙂 I will make sure to reply!

I hope you have enjoyed this blog post and I would like to hear from you! Don’t be a stranger 🙂

2 thoughts on “Muito in Portuguese”