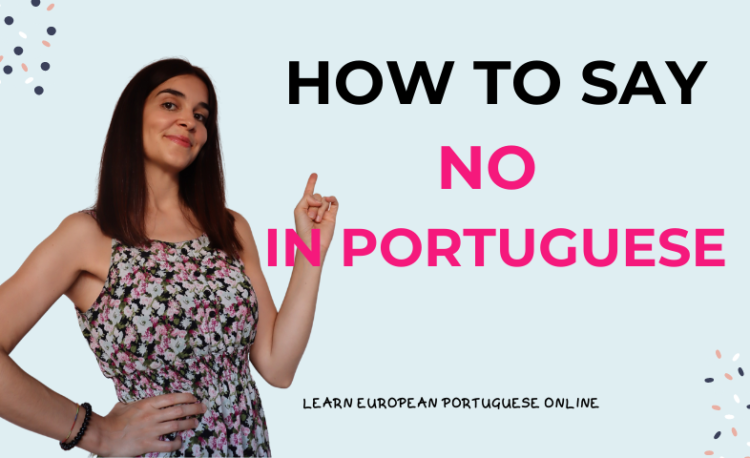 If you want to sound more Portuguese, you should know that when we want to disagree with someone, we do not always say no in Portuguese in the same way.

A while ago, I wrote a blog post about 7 ways to say Yes in Portuguese, and you might have been surprised to find out that sim was just one of the ways we have to agree with someone or something.

If you think that there is only one way to say no in Portuguese, read on. You are in for a surprise 🙂

I also made a YouTube video about this topic. Feel free to check it out here:

So, the most common way of disagreeing with something, is by using the word não. This literally means no, and there is not much to it.

Next time, when someone asks you:

If you are not in the mood, just simply reply:

I added the obrigado/a, just because simply saying não might sound a bit too harsh.

Actually, this is why you want to vary your answer, as simply saying no, as in English, can sound a bit impolite.

Thus, we only use it on its own (without any thank-you’s or sorry’s) when speaking to people we know very well, or a mother to her child, or when we actually want to make it really clear that we are already annoyed and we don’t want whatever it is that is being imposed on us.

If you want to sound more polite, then, just add the obrigado/a, and you will be fine.

In the same way as with sim, we can also double our não, in order to make the person we are speaking to sure that what we are saying is true.

So, if someone asks you:

Then you can answer:

This somehow gives the other person more reassurance.

Be aware, though, that this will depend on the tone you use, because you can also say it sarcastically. In this case, you will be saying no, but actually meaning yes.

Another funny fact you have to bear in mind, is that there are some people that start their sentences almost always with não, even if they don’t mean it.

So, to the question:

Someone that always puts a no at the beginning of the sentence could answer:

This no here means absolutely nothing, as the person actually wants to say that yes, he is their son. You can actually see this no as a tic kind of thing… There is a very funny video from my favourite Portuguese comedy troupe about this, so feel free to check it out 🙂

So, now that we clarified all the uses of the word não, let me give you more options on how to say no in Portuguese.

Another way to say no, is to say nem pensar. Literally, it means not even to think about. So I guess it is safe to say this is the equivalent to Don’t even think about it in English.

A variation of this answer can be:

So, as you can see in this case we are using the Imperative form of the verb, instead of the infinitive. We make it even more personal this way.

The verb achar means to think/ believe something. In this case, we will answer no by asking a question, as follows:

This is the equivalent to the English do you really think so?

It is a kind of a sarcastic way of saying no, because it seems like you are asking the other person’s opinion (in other contexts, when you use this word, you might really be asking it), but the tone you give to this sentence will make the other person understand that you are saying no to them.

This is yet another creative way of disagreeing with someone. Actually, when you are a kid in Portugal, you probably hear this more often than the word não. Ok, maybe not, but parents in Portugal use this a lot!

If you translate it literally, this expression means This was all that was missing, as in We already had a lot of bad things happening, and this was really the last piece missing. It could be used as a good thing, but normally people use it with a negative connotation, when things are not going their way.

Besides, it can be used in other contexts too, but it is regularly used to say no, as follows:

Answering with the verb as well as with não

When we want to use the verb to disagree with someone, we will have to duplicate the não.

I don’t exactly know why, but when using the verb to answer something negatively, it almost always sounds as if the person is fed up of so many questions.

Therefore, I normally avoid answering negatively and using the verb. However, if you do it, do not forget to double the não.

There are many ways to say no in Portuguese. If you want to sound more native-like, just mix and match these 5 expressions, and you will likely impress your friends and relatives.

Just be aware that many of these words should only be used in informal contexts, or you might sound rather impolite.

When wanting to be polite, just add an obrigado/a after the word não, and you should be fine 🙂

Check out this overview of 5 ways to say no in Portuguese:

Tell me below if you have used any of these expressions. Also, write a sentence using any of these words, so I can check if you got it right 🙂

If you want to learn Portuguese in a relaxed but effective way, make sure to check out my European Portuguese Master Course.

I hope you have enjoyed this post and I send you a beijinho!