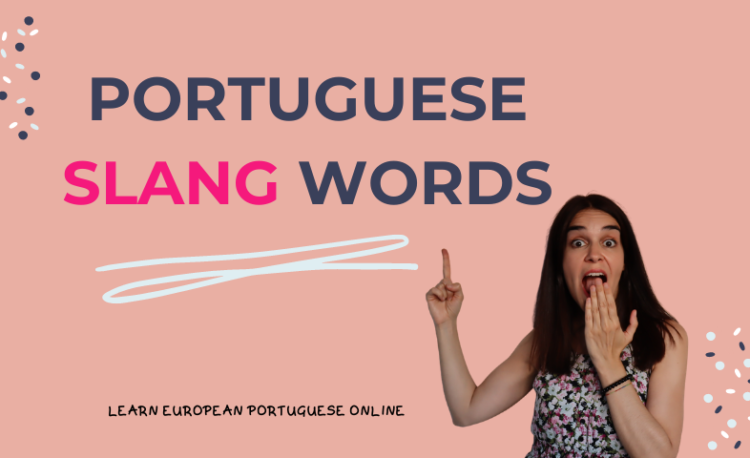 Today I will write a post about some Portuguese Slang Words, as many of my students show interest in it. I will also include some Portuguese swear words, so be aware that this might not be an adequate article for children.

But you know, we have a saying. If you get hurt, we say you should say the swear word, cause it will alleviate your pain: Diz a asneira que alivia! And I do think some of it is true… and besides, these words are part of the language, so if you are in a journey to learn the best Portuguese you can, you should also know them (if for nothing else, at least to avoid them and recognise them if someone uses them against you! Furthermore, it is somehow funny!).

So let’s dive into the mysterious world of the Portuguese Slang Words.

Fixe – Cool. It is very used, especially by millennials and younger generations. It generally means “cool”, but sometimes it is also used as “nice”. If you see a nice movie, you can say “O filme foi muito fixe”, for example.

Tasse – It comes from “Está-se bem”, which then is transformed in “‘Tasse bem” and then further shortened into “’Tasse” to say or ask if everything is going well with someone.

Tá tudo? – This is also something we use to ask if everything is ok. It comes from “Está tudo bem”, which becomes “‘Tá tudo bem?” and finally just “Tá tudo?”

Que Pisso – This means something like “How Lucky!”…when something just happens the way someone wants by luck, you can use and abuse of this expression.

Tótil – Its origin is unknown and it means “a lot” or “very”, or even “really”. For example, remember the movie from before, when you said “O filme foi muito fixe”..well, you can further “slang it” by saying “O filme foi tótil fixe!”

Bué – We think this word has its origin in an African dialect or language and it also means “a lot” or “very”, or “really”. So, again, you can say the previous sentence about the movie like this: “O filme foi bué fixe!”

Tuga(s) – This is the word we use to speak about Portuguese people – “os tugas” are “the Portuguese”. It comes from the word “Portugal”. Do you get it? =)

Giro(s)/ Gira(s)/ – We use this word pretty much for everything. To say that something or someone is beautiful, cute or fluffy. You can say “O rapaz é muito giro” (The boy is very cute/ beautiful), but you can also say “A tua t-shirt é gira!” (You t-shirt is cute/nice). See what I mean? We use it A LOT! Tótil…

If you want to know more about this words, check my video:

Ok, parents! Please stop your children from reading and knowing the following words. I would not use them when I was a child as I would be in deep trouble with my parents and I hope you do not let your children say it either. I even avoid them nowadays, but again, they are part of the Portuguese language and if you are interested in them, just keep reading!

Caralho – This literally refers to the male sexual organ. Actually, some say it has its origin in the discovery times. “Caralho” was that high pole where the seaman would stand alone to check the horizon. It is said that no one wanted to go there, so to send someone there would be a bad thing. Therefore, “vai para o caralho” became a bad thing, as you are sending someone to that annoying place. Nowadays, no one really thinks of this meaning anymore, but we associate it with the male sexual organ, as I previously referred.

We also use it to speak about something that we find really cool as in “É do caralho!” or in negative sentences meaning “nothing”, as in “Nunca fizeram um caralho” (they never did anything!). It is a little bit like the “f” word in English, I would say.

Foda-se – This means something like “fuck it”. “Foder” is the verb “to fuck”. We also use this in many different situations, but one I remember a lot is when someone hurts themselves, for example.

Merda – This is the softest of all these words and it literally means “shit”. It is not considered as bad as the other ones, but still I would not be using it around with everyone.

Puta que Pariu – This literally means “the bitch that gave birth”. It’s weird, I know. You say this about something or someone you hate. Sometimes friends use it between them, but I am telling you, it is not very pretty.

Filho da Puta – This one is related to the one before, as it literally means “son of a bitch”. You know what this means, I guess it is quite self explanatory and we use it more or less the same way as you would use it in English. Again, not pretty!

Portuguese slang and swear words may not be the most elegant or the prettiest, but they are a part of the language and it is sometimes fun to know them. Please be aware that you should only use them in very informal settings, with friends or people you know very well. Never attempt to use them in a formal setting or you will probably end up making people faint like what happened in a very famous part of the movie “My fair lady“.

I hope you enjoyed my article and that you leave your comments below. Did you know any or all of these words? Do you find them amusing? Do you think it is important to know them as part of your learning process?