Home>Blog>Grammar>Adjectives in Portuguese – the Plural 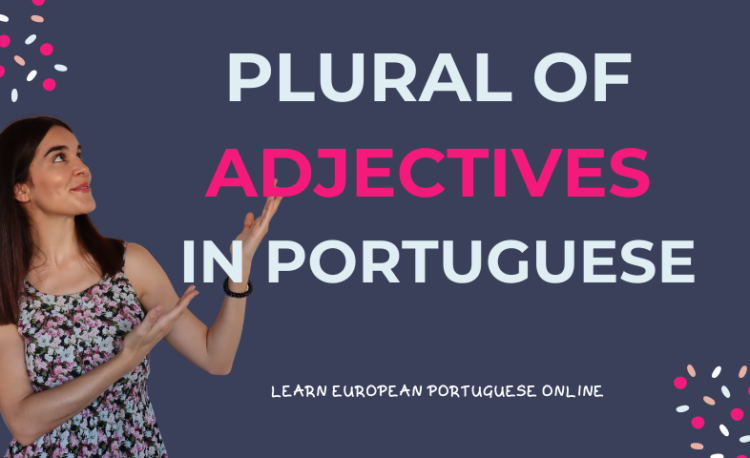 If you have been struggling to deal with the adjectives in Portuguese, you have come to the right place!

I will tell you all about these little pieces of language goodness, and I will let you know the rules to form their plurals.

You can also check out this topic on my YouTube channel:

Adjectives are words that describe or modify other words, making your writing and speaking much more specific, and a whole lot more interesting.

Basically, adjectives are words like big or small or cute or funny or all those words you use to describe something or someone and that modify the nouns.

In Portuguese, they also are used the same way, so no problems in there!

However, unlike English, Portuguese adjectives have two things that make them very original:

Position of the Portuguese Adjectives

So, let me first tell you about where adjectives normally come on a sentence.

While in English (and some other languages) adjectives come before the nouns, in Portuguese they generally come after.

Take a look at the following examples comparing English to Portuguese:

This is true for the majority of the cases, however we do have instances when the adjective also comes before the noun in Portuguese.

When the adjective comes before the noun in Portuguese

This is rare, but it does happen!

If you look at the sentences above, you see that they have different meanings, just because of the position of the adjective.

In both examples, the first sentences of each group refer to the actual/physical characteristic of the person, while the second sentences refer to a trait of the character of the people – it conveys a more metaphorical meaning.

Another reason to change the “normal” order of the sentence in Portuguese, is when we want to highlight the characteristic we are describing.

Here we want to really let the others know that the idea was really bad and that the contestant was really good, so we highlight those characteristics by bringing the adjective to the position before the noun.

So, in general, adjectives come after the noun in Portuguese, but there are some exceptions, when we want to convey a more metaphorical meaning or when we want to highlight a certain characteristic.

Bear in mind, though, that this does not apply to every adjective. It applies only to some.

The variation of the adjectives in Portuguese

Another fact to bear in mind is that, unlike in English, adjectives will vary according to the gender and number of the noun they are modifying.

As you can see, not only the nouns, but also the adjectives, changed according to the gender (masculine or feminine) and the number (singular or plural) of the noun.

In general, adjectives have four different forms, then. However, if an adjective ends in something other than an “o” in the masculine singular form, it generally will only change according to number (singular and plural) and not according to gender (masculine and feminine).

This is the case of the adjective “contente”, for example:

As you see, you only have two forms – contente and contentes – because this adjective does not end in an o in the masculine singular form.

So, we now know that there are, in general, four different forms for the adjectives. But how do we form the plurals? Read on to find out!

The plurals of the adjectives in Portuguese

To form the plurals of the adjectives in Portuguese, we must follow some rules.

2. When an adjective ends in an m, exchange the m for an n and add an s:

3. When an adjective ends in a consonant, add es to form the plural:

4. When an adjective ends in an s, it has the same form in the singular and plural:

5. When an adjective ends in an ão, it can form the plural in three different ways:

Unfortunately, you will have to know these by heart, as there is no rule that I know of that can guide you.

6. When an adjective ends in an l, it will form the plural by transforming the l into an is:

And this is it! These are the rules to form the plural forms of the adjectives in Portuguese. Some of these rules are the same for the nouns, but I will be making a new blog post about this soon.

In conclusion, adjectives in Portuguese can be a bit tricky, especially when forming the plurals. However, if you follow the rules above, you will likely use them correctly.

Now, I would like to ask you to answer the following question in the comments below:

Don’t forget to leave me your answers! Don’t go checking the other ones (if there are any!).

5 thoughts on “Adjectives in Portuguese – the Plural”