Home>Blog>Grammar>Questions in Portuguese | The Use Of “é que” 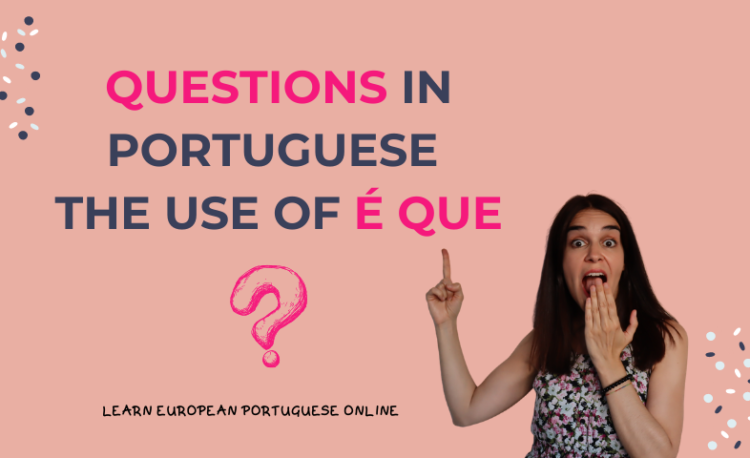 Today I am going to tell you why sometimes in questions in Portuguese you see things like “o que é que é?” instead of just the more simple “o que é?”. Have you ever wondered why this is so? If you did, please keep reading as this post is for you!

Asking Questions: The meaning of “é que” in Portuguese

So, you might have asked yourself: What does that “é que” mean in the sentence? The truth is it is very hard to translate. Let’s see, if we were to try to literally translate the sentence:

We would have to say it is something like this:

“Where is it that you are?”

It does not make a lot of sense, right? Well, but this is really the closest I can get to “successfully” translate it…

The truth is: it does not have a meaning on itself. It just is there…

So, let us just say that the meaning of this word is not really what matters, but let us focus more of why we insert it in many of the questions we utter, shall we? O que é que achas? (ups, there it is!)

So, about the reasons why we use “é que”…

First of all, you can see it in all “WH-questions” in Portuguese, that means you can have it with questions starting with “Quem”, “O que”, “Quando”, “Quanto”, “Onde”…and all the others. Check out the following examples:

So, why saying it like this when we could skip the “é que”? Or could we?

So, the truth is, we just use it so that we do not have to invert the sentence’s normal order.
The normal order of a sentence in Portuguese is: subject- verb- object. You can see this by the sentence:

But with “WH-questions” (like when, where – quando, como, etc) if you don’t have “é que”, you will have to invert the order of the question when you have an “overt” subject in the sentence (like tu, ele, você, etc).

By “having an “overt” subject” in the sentence, I mean having one of the subject pronouns in the sentence – like eu, tu, ele, nós, vocês, eles or the actual subject like “a Maria” or “as bananas” or “o arroz” in the case of the sentence above.

So, as I was explaining above, when I have a question with one of the “WH-questions”, I will have to invert the natural order of the sentence to verb- subject- object if not using “é que” and keeping the “overt subject” (with this I mean if you don’t hide the subject, as you know we can also do in Portuguese). For example, if I wanted to ask “Where do you eat the rice?” (weird question, but hey, could happen…), you would have to say:

But, changing the order is a bit troublesome for speakers (in any language a native speaker will unconsciously prefer not to have to change anything so not to spend time/ energy in the brain. It is scientifically proven by linguists! I am not making it up ;)).

So what we do is one of two things. When possible, we hide the subject, as in:

Como comes batatas? (It is still there, but it is implicit – hidden)

We can do this if it is completely obvious who/ what the subject is from context or from the conversation we had before .

If that is not the case, then we opt for the second solution, which is adding this language aid “é que”, which for some reason allows the rest of the sentence not to be inverted, like this:

Como é que tu comes batatas? (As you see we have the “WH-question”, then the normal Portuguese sentence order: subject- verb- object).

The insertion of “é que” for no apparent reason

Ok, sometimes we use it for no reason and you may say (and I agree to some extent) that this goes against that above-mentioned argument that users of a language only use the things they really need to….

Well, that is not actually the case here because we sometimes insert the ”é que” in questions even if we would not need to because we also hide the subject, as it is implicit about who/ what we are talking to/ about:

Como é que comes batatas? (As you see, we added “é que”, but there isn’t an overt subject so “é que” would not be necessary).

The only explanation I can give for this, out of the top of my head, is that this actually does not cost us more energy/ effort because we do not need to think long about it, as having “é que” in a question is always acceptable, while in some cases not having it it is not. Therefore, we just use it as a general rule and that spares us the time and effort to think about whether we should use it or not.

Now, you must be thinking: “Great! Then I will use it always and voilá! Problem solved!

Well, while this is what I normally advise my students to do “always use it, and then you know you will be right”, the truth is that when you want to speak Portuguese in a more advanced way, and when you want to have a very formal conversation, then you would probably not use it. You would opt for the inversion instead (B2 to C2 level students, this is for you ;)).

So, let’s say you are having an interview, and you would like to ask how many hours you are going to work, you would probably go for the inversion or you would just hide the subject (because you want to sound more eloquent and smart) and you would say:

So, to sum up, here is the hard facts of what you can and cannot do:

I know, for someone who wants to save some energy while using the language, we have a lot of different ways to ask the same thing. But hey! I didn’t make the rules 😉

Make sure to check out my European Portuguese Online Course where I explain this and many other topics in more detail.

So hey, let me know in the comments section below whether you struggle with this “é que” thing or not, and if you liked my post about it.

I hope now you can properly ask questions in Portuguese. And also, just to sound cool, you can start asking questions like: “Como é que estás?” or “Qual é que é o teu nome?” among others 😉

Categories: GrammarTags: questions in Portuguese, Use of "é que"

12 thoughts on “Questions in Portuguese | The Use Of “é que””