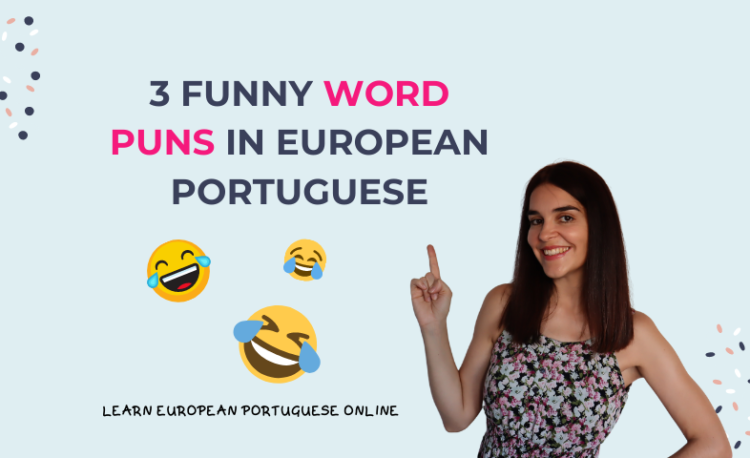 Hello everyone! I hope you had amazing holidays and that you are ready to have a little fun with today’s post about 3 funny word puns in European Portuguese.

But first of all, I think it is important to define what a word pun is. Word pun, or trocadilho in Portuguese, is according to Priberam Dictionary “um jogo de palavras”, which means that one uses known words and plays around with them to make funny expressions.

Do you know who was great at these? Chandler Bing from F.r.i.e.n.d.s. Man, judge me, but I absolutely love this guy because of his word puns and crazy jokes!

Yeah… “duties”… “doodies”… you see the joke in there, right?

Anyways, even if you are not such a big fun of this guy or the show, I bet you have also used some word puns in your language and now I am about to show you some in Portuguese too, so you can surprise your friends and family with it! Beware, though, some of them are a bit on the “doodies” level, if you know what I mean 😉 So if you are a sensitive person, stop now or forever regret it (potentially!). Shall we begin?

Okay, in line with Chandler´s joke, we arrive to this pearl of the Portuguese word puns. If you see it literally, it will mean something like “Never spend everything”. You know, this could be the kind of advise a parent gives to their kid, telling them to never spend all their money, for example. Seems like a nice advice, right?

Only we rarely use it with the literal meaning anymore. This is because if you say this word very fast, it will sound differently, like: Num cagastes tudo! Well, you are probably thinking, but what does that mean? I do not know the word “num” and the verb is also unfamiliar. Well, that is because no one really teaches you this verb, since it is not such a nice one to use.

Let me deconstruct the sentence for you. Num in this sense is the same as Não. Especially in the north of Portugal, when speaking fast, people tend to transform Não into Num. Secondly, the verb cagar means “to shit” and it is not very polite to say it. If you conjugate the second person singular of this verb in the perfect tense, you will end up with “Tu cagaste”. So, there is still an “s” too much, right? That is actually no problem because people also tend to add an “s” to the second person of this tense- it is wrong, but some people do it. Therefore, the word pun works perfectly!

So, to conclude, you end up with Num cagastes tudo, which means “You did not shit everything!”. Basic, right? But why is it still so funny when people use it? I will let you judge it!

Ok, again, be aware of the bad words! You know that bacalhau is our main dish here in Portugal, right? Probably you have tasted it and you like it. You might also know that many of our conversations revolve about bacalhau and how to cook it..all the 1001 ways of cooking cod!

Well, there is no surprise, then, that we also have word puns involving this fish!

One of our most known ones is O bacalhau quer alho, which literally means “The cod wants garlic”, meaning that when you cook it you should use garlic because it goes well with it.

However, when you say these words fast, you will end up with O bacalhau caralho.

Again I am sorry for the bad word there! Caralho is a kind of an insult if you use it with someone else. It literally refers to the male sexual organ but people use it all the time when they are frustrated or irritated with something. Hence, the word pun!

A kid in the 90s called Saul, made the word pun forever known, by singing a very interesting (*weird*) song about it!

Ok, I am happy to say this one does not involve any bad words. It is a common word pun, involving a proverb.

However, because of sound similarity, nowadays people do not say it like this anymore. Instead, they say Quem sai aos seus, não é de Genebra. This means that “the one who is like his own, is not from Geneva”.

Yes, if you thought I am referring to the city in Switzerland, you are right. We do say that if you are like your own people, you are not from Geneva.

This has absolutely no meaning, but I guess someone just started making this joke because the two sentences sound so similar, and it stuck. Today every one says it this way, but we know what the person saying it means, even if the sentence is completely different in literal meaning from the original one.

BTW, I also made a video about this topic, check it out!

Alright, this is it for today! I hope you liked it. I do, for a fact, and being a fan of Chandler (sorry about the Friends reference, yet AGAIN!) I often use it to break the ice or when I feel uncomfortable with something.

What about you? Do you like trocadilhos? Did you know about this 3 funny word puns in European Portuguese, or is it the first time you are hearing about them?

Let me know in the comments below!