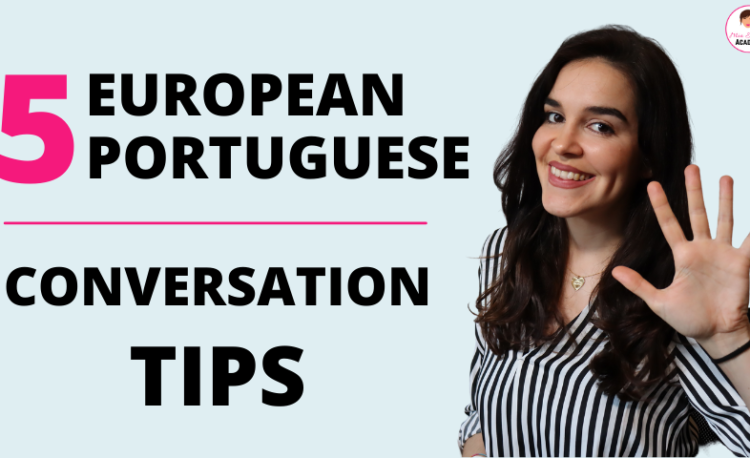 Today I will speak about 5 European Portuguese conversation tips to sound more natural.

Some of you have already told me that you have trouble maintaining a conversation in Portuguese. Speaking is not as easy as reading or writing and when the Portuguese hear that you are not Portuguese, they tend to change the conversation to English.

Have you been through this?

There are some tricks you can use to sound more natural in Portuguese and to sound like a native Portuguese, who knows.

In this post, I’m going to tell you about some of those tricks. I hope you like it!

Moreover, you can learn about this topic also on my YouTube channel:

Also, don’t forget to subscribe to my channel and press the notification bell to receive a notification every time I publish a new video.

Now, let’s go on to our tricks!

The first trick to sound more natural in Portuguese is: Using the interjection “oh”!

For example, if someone tells us:

“Olha, ele afinal não quer falar contigo!” – “Look, he doesn’t want to talk to you after all!“

The intonation we give can also convey different ideas. If we say “Oh” we are sounding angrier. Probably someone told us something that made us upset or exasperated.

Try to listen to conversations in Portuguese and see where and how the Portuguese use this interjection. It is everywhere.

In fact, this is one of the strange things that the Portuguese do and that I talk about in this video here. If you want to know more about these strange things, go check out the video – but only after finishing this article!

The second tip to sound more natural in your Portuguese conversations is: Using “ó” before calling someone.

This is also another of the weird things that the Portuguese do, but it probably comes from our “origin language”, Latin.

This “ó” is used to call someone.

For example, if I want to call my friend Manuel, I will say:

Many people think that this is “o Manuel”, but in reality it is not.

This is something different, and we use “ó” to call someone, to get the person’s attention.

The third trick to improve your Portuguese conversation is: Using “pois” (right) and “pois não” (isn’t it)!

When we are talking, we often use “pois” and “pois não”.

Although they are similar expressions they are used for different things. Usually, we use “pois” to agree with someone and to let the person know that we are listening to them.

If someone tells us:

“Pois não”, in Portuguese of Portugal, is used when we want to ask the person if he or she agrees with what we are saying.

For example, we can say:

Here we are trying to make sure that the person is not upset with us, so we ask the other person what they think, through this “pois não”.

Other phrases that could work with “pois não” are:

The fourth tip to sound more natural in a Portuguese Conversation is: Using “não é”!

So, when we want to check if what we are saying (or asking) is true, but with affirmative phrases, we will use “não é”.

In fact, the most correct option would be to use the same verb and say:

And last but not least, the fifth trick is: Using “inho” with everything!

The other day I went to the cafe and realized that the girl who worked there adds “inho” to almost every word she says.

In fact, you can add “inho” to any noun or adjective, in Portuguese.

Usually, this “inho” or “inha” has a “cutie” connotation:

For example, we can say:

“Aquela menina é tão queridinha” – “That girl is such a sweetheart.”

“Aquela menininha é tão queridinha.” – “That ‘little’ girl is such a sweetheart.”

Furthermore, we can use this “inho” to be more polite or friendly – which is what happens at the cafe, for example:

“E um pãozinho? Olhe que está quentinho!” – “And a bread? Check how warm it is!”

On the other hand, on some occasions, this diminutive may have a bad connotation:

Here we are “diminishing” that woman and her character.

Here we are underlining that the person is being silly.

So, you know: the “inho” or “inha” is usually used to make things cuter or nicer, but there are contexts in which it can, in fact, have more negative connotations. However, in most cases, the connotation is quite positive and even what seems negative, if used with a more positive intonation, can become positive as well…

These are some of the things you can do to sound more natural in your conversations in Portuguese.

Who knows, maybe from now on you can have conversations only in Portuguese, without switching to English?

Does this usually happen to you?

Do the Portuguese, when they want to help, change the conversation to English?

Tell me in the comments.

I hope these tips help you! See you in the next post.