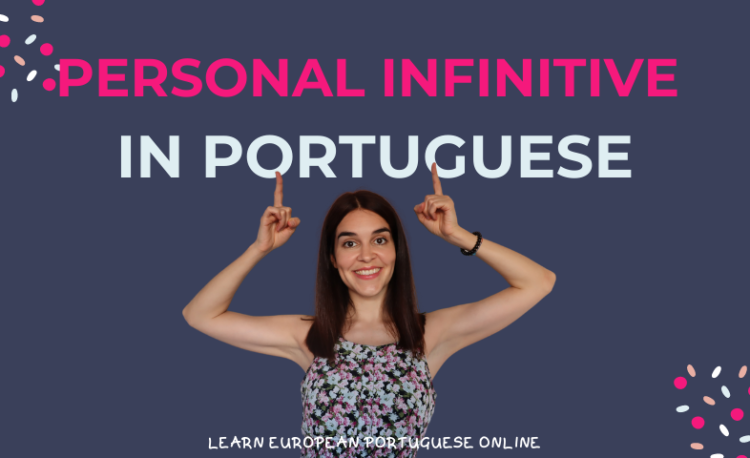 In this post I am going to speak about the Personal Infinitive in Portuguese. I know that many of my students struggle with it and chances are you do too.

The Personal Infinitive, however, will vary according to the person. Thus, it will have different conjugations for different persons.

Below you can check how this form is conjugated and when it is used.

You can check how the conjugation goes on the following table:

As you can see, the first (eu) and third (você/ ele/ ela) persons always stay the same as the verb’s “name” across the three types of verbs (verbs ending in ar, er and ir).

The second person singular (tu) adds an es to the infinitive of the verb.

The first person plural (nós), adds mos to the infinitive of the verb.

Finally, the second (vocês) and third (eles/ elas) persons of the plural form, add an em to the infinitive of the verb.

Ok, but now that you know the conjugations, you may be thinking when to use it. Well, don’t worry, read on and you will soon find out! 🙂

Personal Infinitive – When to Use It

The personal infinitive can and will be used many times. In the following lines, I will tell you the most common uses of this form, so that you can start using it with ease.

After prepositions like Até, Para, Por, Sobre, Após… and many more.

Até aprenderes a somar, não podes aprender a dividir (Until you learn how to add, you can not learn how to divide).

Sobre quereres ir morar para a China, não tenho opinião (About you wanting to go live in China, I have no opinion).

Check out the following examples:

There are some impersonal constructions, which do not have any specific subject, that ask for the personal infinitive as well.

É importante comunicar claramente o que queremos (It is important to clearly communicate what we want).

The impersonal sentences above, are the ones underlined: É preciso, É necessário, É importante. They are called impersonal because they do not have any specific subject.

The use of the subject

The subject in sentences using the personal infinitive might be overt or hidden.

This means we can either have:

When the subject is understood by context (as on the example above), Portuguese speakers tend to hide it. However, when the conjugation of the verb and/or the context does not make it very clear, we need to add the subject.

I do not need to add tu because the verb conjugation (fazeres) lets me know that the subject I am talking about is tu.

But that is not always the case:

In this case, if I don’t overtly add the subject, I do not know if I am saying something in general or if I am speaking to someone.

So, I could be meaning to say:

So, to sum up: really check if the subject is understood by context or if you need to make it clear about/to whom you are talking.

The use of the Infinitivo vs Conjuntivo

Another thing you should bear in mind is that the Personal Infinitive sentences can be substituted by the Conjuntivo.

To do this, you just need to change them slightly.

Normally, either the preposition changes a little bit or a que is added or substitutes the de.

Let’s check the examples above again, how they are in the infinitive and how they would be with the conjuntivo.

As you can see, the sentences change slightly, but they have the same meaning.

If you want to know more about the use of Conjuntivo, don’t forget to check my posts about the Present, Imperfect and Future Subjunctive.

In conclusion, the personal infinitive can be your ally, as it can substitute the more complicated Conjuntivo form in many instances. You just have to check out its use and conjugation, which I hope I have helped you do with this blog post.

In the comments below, please do the following:

I will check it out and let you know if you’ve managed. 🙂 This can be an excellent exercise for you to consolidate what you have learnt, so I will be waiting.

6 thoughts on “Personal Infinitive in Portuguese”