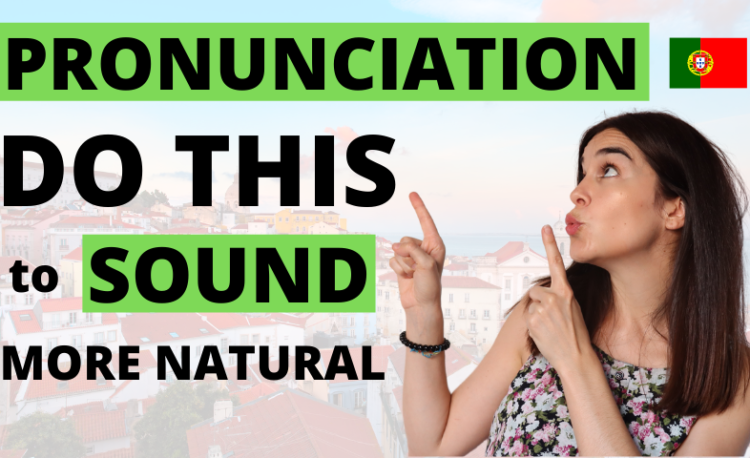 Hello everyone! Welcome to Mia Esmeriz Academy. My name is Mia and I am here to teach you European Portuguese. Today I will be helping you sound more like a native speaker, by applying 3 European Portuguese Pronunciation Tips to your speech.

Make sure to stay until the end because I will share a tool with you, which can really help you with your pronunciation.

Now, I know you might be a beginner, but it is important that you get this right as soon as possible, because this will help you a lot in the future and it will allow you to understand and speak European Portuguese much more easily.

You can watch the following YouTube video, where you see me pronouncing the examples below:

If you would like to support my work and help me bring more of these videos out, don’t forget to subscribe and leave me a like. Also, hit the notification bell so you get a notification every time I post a new video. Thank you!

I know it might sound very difficult, but you don’t need to worry too much about these terms. This is just to give you the names of these processes, in case you want to research further.

I will explain each of these things, give you some examples of what these are and then you can apply them to your daily speaking practice, so that you can start sounding more like a native Portuguese speaker, from the beginning.

The first process is called: LINKING.

Linking is when you link the consonant sound of the end of one word to the vowel sound of the beginning of the next word. For example, we have:

This is quite important to sound more natural, and there are even some rules that apply with certain consonants changing sounds, when put together through linking, with vowels. Take a look at this example:

While when I say the word slow it sounds UNS OLHOS, when I say it fast it will sound like “UNZÓLHOS”.

The “s” at the end of words, will get the sound of a “z”, when connected to a vowel sound of the beginning of the next word.

In the same way

If you want to check more of these changes, check my European Portuguese Pronunciation Guide.

I know it might sound quite difficult to do at first, but with practice, you will get there!

The second thing we should talk about is INTRUSION.

You get intrusion, when an extra sound gets in between two vowel sounds, to make them sound more natural.

The most common one in Portuguese is:

This happens, for example, when you have two “a” together, especially in certain areas of Portugal.

It also happens when you have an “a” at the end of one word and an open “e” at the beginning of the next word:

Now that you know about intrusion, write in the comments below any sentences you find in Portuguese that have intrusion in them.

Now, the third process that happens when Portuguese people are speaking fast and naturally is: ELISION

Elision happens when you lose a sound.

For example, when you have a word ending in a vowel and the next one beginning in another vowel, this can happen.

Some people use this even too much and speak funny. They sometimes go as far as to say things like:

I have to say, this does sound a little bit weird when such a small word like “te” gets cut. But many people do it!

My father does this often and my mother is always telling him off!

So, these were the 3 secret tricks that you can apply from today to start sounding more like a Portuguese native speaker. We use them a lot and you should start incorporating them too in your speech!

If you heard Portuguese speakers speaking fast to each other, you might have gotten puzzled about the way some words sound. Now you know why and you know what you have to do to start sounding like a true Portuguese.

I just want to take the time to let you know about my European Portuguese Speech Course, which is included in my All-In-One Portuguese Course or that you can buy separately and that will help you A LOT with the sounds, shortcuts and true native speaker pronunciation of Portuguese from Portugal.

I will explain all the sounds of Portuguese to you and I will analyse true videos of real Portuguese people and the changes they are making when speaking naturally.

To check it out, click on the links above! You can also always send me a message or an email if you have any further questions 🙂

I send you a big kiss and I will see you in the next post.