Home>Blog>Vocabulary>How to ask for the bill in Portuguese 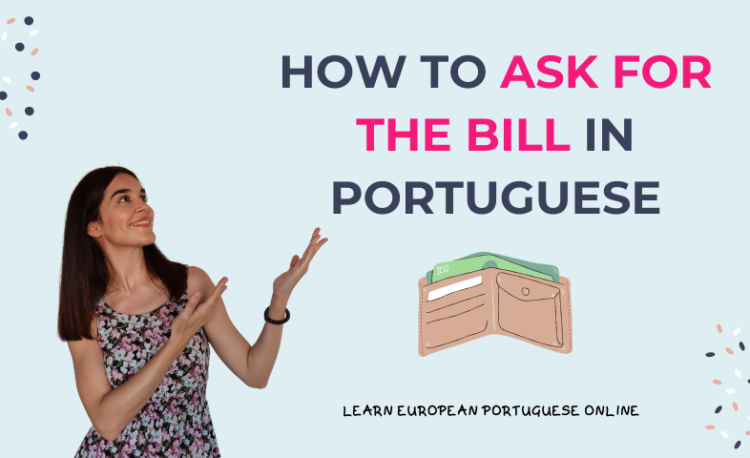 In this short article, I want to let you know all the ways there are to ask for the bill in Portuguese.

This might be handy, because it is one of the things that you most certainly will have to use when you come to Portugal.

Sure, you can also just ask it in English, but I am guessing that if you are here, it is because you would like to know how to do it in Portuguese as well 🙂

Kudos to you! I guess that it is very nice when someone non-Portuguese tries to learn at least some basic phrases in this beautiful language. We, Portuguese, really enjoy it when people try to speak to us in Portuguese, even if that is not their mother tongue.

Anyway, let me then tell you how you should ask for the bill when you come to Portugal.

I also recorded a YouTube video about this topic. You can check it out here:

How to ask for the check in Portuguese

So, when you are in a restaurant or a cafe, or something along those lines, and you ordered food, you will likely have to pay the bill at the end. Yeah, here it is also compulsory. Portugal is good, but it is not perfect he he.

You can do this in many different ways:

This one is the most informal ways, but it is the one that will make you sound more Portuguese. See, in Portugal, we have the tendency to put a “inho” or a “inha” at the end of nouns, like you can see in “continha”. We added “inha” to the word “conta”, and voilá.

So, imagine you see the waiter or the waitress and you somehow manage to get his/ her attention. All you have to do is put your hand up in the air and say:

He will know what you want, and you will still sound polite, even if you only literally say two words. Cool, huh?

This form is also still informal, but not as much as the one we saw before. In this case you are saying something like “It would be the bill”. This is part of a bigger meaning, because it is as if we cut the sentence “What I wanted would be the bill” short. I know it might not make total sentence in English, but in Portuguese it does.

You also would say this after getting the attention of the waiter, and maybe you can add a hand sign if the waiter is not so near you. The hand sign is like if you write a check in the air or something along those lines.

We could also say “Queria a conta”, and this means “I would like the bill”.

When we want to sound polite, we use the verb “Querer” in the Pretérito Imperfeito, which is “Queria”.

We can use this verb always when we want to ask for favours, ask something from someone, etc.

To ask for the bill in Portuguese, you can also just simply say “A conta, por favor”. Once again, we are keeping it simple and we even skip the verb altogether.

Sometimes, from context, you can skip the verb and simply just say what you want. It is the case in the restaurant, when you are asking for the bill.

Once you get the attention of the waiter or the waitress, even if you don’t say the verb, he or she will likely know what you need by context. Especially if you are finishing with eating your dessert.

There is not much left than asking for the check, is there?

To complement it, you should add a “por favor” at the end, though. Otherwise, if you don’t use the “inha” at the end (like we saw we do with “continha”), you might come across as a bit harsh, cause you have nothing to soften what you are saying.

So go ahead and use this form, but don’t forget to say “por favor” (please) at the end 🙂

Another thing you can do to sound more polite is adding a “Desculpe” at the beginning of any of these sentences.

In this case, we have a more formal way of asking for the check in Portuguese.

You should notice that when being more formal, we tend to use longer sentences, and this is also the case here.

This sentence literally means “Excuse me, could you bring me the bill?”.

Another more formal way of saying you want to pay is this one, which literally means “Excuse me, would it be possible to bring me the bill?”

This is really formal and polite.

Notice that in Portuguese, you can either say “Seria possível” or “Era possível”. These two sentences mean the same in English: would it be possible.

In Portuguese, you can either use the Pretérito Imperfeito or the Conditional to say this.

I explain more about it in my European Portuguese Master Course. So, if you are interested, you should definitely check it out 🙂

Finally, we can also use another verb and say “Desculpe, queria pagar”. This means “Excuse me, I would like to pay”.

If you feel like varying a bit, this is the way to go 😉

Portuguese is a very rich language and even to say the most simple things, you have a lot of different choices.

I hope you enjoyed these seven ways of asking for the bill in Portuguese and that you will use them in your day-to-day, whether you are visiting or you live in Portugal.

Here you can see a list of the 7 examples again:

Let me know in the comments below if you enjoyed this article and if you have already used any of these 7 expressions.

2 thoughts on “How to ask for the bill in Portuguese”