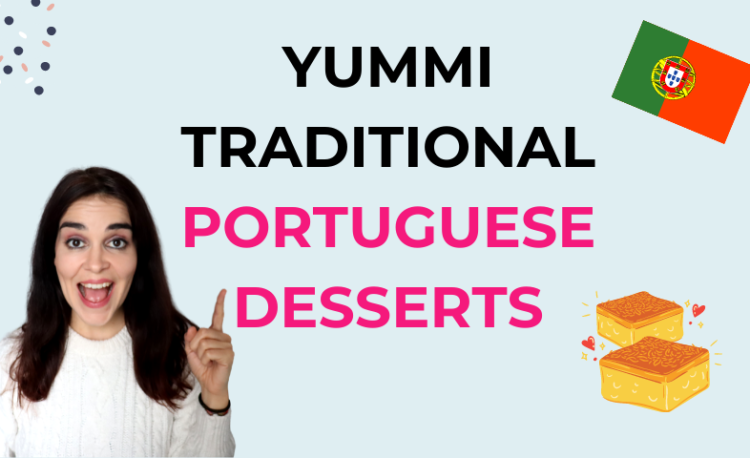 In this post I am going to tell you all about the best Portuguese Dessert Recipes and some stories related to them. I will also include some links with the Portuguese and English recipes, so that you can go ahead and start “baking them cakes” 😉

These desserts are really sweet, so if you have any disease that can be worsened by eating these, abstain from doing so! And even if you’re healthy, don’t eat these all the time, just moderately. This is an advice from a true Portuguese, and I know what I am talking about 🙂

Now, if you’ve been to Portugal, you probably already noticed that we love good food and that we have a lot of fantastic Portuguese recipes and amazing traditional Portuguese food. Main-dishes and entrées are awesome enough, but our desserts seem to be some of the best you tried as well, and now you want to be able to prepare them for your friends and family.

Does this sound like you? Well, then you have come to the right place!

So here they come!

If you come to Portugal, you have to try our Pastel de Nata (here you can find the recipe in Portuguese). If you don’t, it will be like “Going to Rome and not seeing the pope”…(Portuguese saying inserted).

How to prepare it:

Since I am no expert if you want to make the dough yourself and cook these delicious pastries, then check this link here.

My story with this delicious Portuguese dessert

I have a funny story about Natas.

As you may or may not know, I lived in Holland for three years – from 2012 to 2015. I did enjoy living there, but I missed Portugal a lot. I missed my Portuguese friends, family and also FOOD. Desserts were no exception.

Actually, I was never a super big fan of very sweet things, and Pastel de Nata was never my favourite thing in the world. However, when I was in Holland I did miss it. You know what they say: “Absence makes the heart grow fonder”. I guess this applied here.

So, now to my funny story: Holland has a national holiday that is called Koninginnedag (at least it was at the time, now I believe it has changed to Koningsdag – any dutch people out there to correct me?). This means the day of the queen. Back in 2012 Queen Beatrix still reigned in Holland and the day was celebrated on the 30th of April – the day of her inauguration ceremony.

I have to say, this was my FAVOURITEST (word pun intended) day in the whole year. The weather was normally good (something rare in Holland), people would come out to the streets to dance and celebrate and you could sell anything (within reason…) you would like in the streets such as food, clothes, things you had around the house you did not use anymore, gadgets and much more. One time, I even saw someone selling hugs and kisses haha!

Anyway, I normally just watched and bought things that were quite handy and super cheap. BUT one time I decided to take measures into my own hands and I decided to sell something.

And what was it that I decided to sell? Well, maybe you’ve already guessed it: Pastéis de Nata!

I baked 400 hundred of these, I was all day preparing and then I went and I sold these on the street. They were so YUMMI!

At first I didn’t know if this would work or if people would buy them, but the fact is that they were a HUGE SUCCESS. I sold them for 1 euro a piece more or less, and I sold all of them in just this one day.

I put on my best Dutch and I told the people about this Portuguese treat. Many would only want one at first, but once they tasted it, they would come back for more. It was really awesome!

Plus, I was told over and over that my Dutch was sweet and that I sounded a bit like back then Princess Maxima, which I saw as a compliment he he.

Soooo… If you want to bake these, go ahead and try it out and maybe if you become good at it, you can even make money from it? I did not bake my own dough, I used pre-made one, so you can still use that and make it good 😉 OR so a bunch of friendly dutch people say 🙂

For those of you who like even sweeter things, you have the famous Pão de Ló de Ovar, which is a specific dessert from the region of Ovar, in Portugal. However, you can now buy it pretty much anywhere in Portugal, and I am sure you will like it very much.

Here are the ingredients for Pão de Ló de Ovar (you can also find the whole recipe there):

Pão de Ló was originally brought to Portugal by the Spanish, who had been introduced to a somewhat similar cake by the cook Giobatta Carbona, a Genoese cook. This was on the eighteenth century, and until now it has only become better and better. YUMMI!

If you want to check out a recipe of Pão de Ló in Portuguese, make sure to go here. If you find the Portuguese recipe too difficult to follow, you also have an English version here.

This is by far one of my favourite Portuguese desserts. When I go to a restaurant, which we used to do a lot before Covid-19, I would order this as dessert many times.

This creamy dessert, made with eggs and cookies is a treat. You have a yellow top part (the egg yolk), a white middle part made of eggs, sugar and cream and at the bottom the cookies in pieces. Sometimes you can also mix the cookies between the top and the middle layers. IT IS SO GOOD.

In my case, I like it especially because of the cookies, because it kind of “cuts” the sweetness a tad. Since I am not a very big sweet tooth, this works well for me.

I’ve also made Natas do Céu when I was in Germany. I wanted to try a Portuguese dessert again – I was missing it. It came out alright, although not as delicious as the Pastéis de Nata in Holland. But still, they were pretty good.

If you also want to try it out yourself, check out the recipes both in Portuguese and in English to help you out 🙂

Another very sweet dessert, Baba de Camelo is made out of condensed milk and eggs. That’s it.

It might sound weird, but it sure tastes delicious. You just have to separate the yolks from the whites, whisk the egg whites, mix the yolks with the condensed milk and then mix everything together at the end and put it in the fridge.

Serve it cold and it will be the delight of your guests!

Ok, I may have skipped some steps, so if you want to really check a proper recipe, go here for Portuguese and here for English.

Alright, I have to confess. This is a dessert I do not like. However, I had to include it here, because it is one of the most famous Portuguese desserts and many of the Portuguese people (and non-Portuguese people) I know tend to like this dessert.

Pudim means pudding. And that’s what it is: a pudding. Ok, I know this does not say much about it, so you really have to try it out to taste it for yourself. However, it is also very simple to make and if you like squishy kind of textures, you will definitely like this Portuguese dessert.

In conclusion, Portugal has a lot of diverse and delicious food. Desserts are no exception.

If you want to surprise your family and friends with these five delicious typical Portuguese desserts, make sure to check the links above 🙂

Also, if you cook them or you have already cooked them in the past, let me know in the comments below how it went!

I am waiting for your feedback and I wish you a YUMMI day.

And again: if you have diabetes or any other kind of disease that can be affected by eating sweets, please avoid these treats. These will not be good for you, as they have a lot of sugar.

Even if you are healthy, just eat this moderately, as to not become ill. I personally can only eat a little bit of these from time to time, so take it from a real Portuguese and avoid over-indulging.