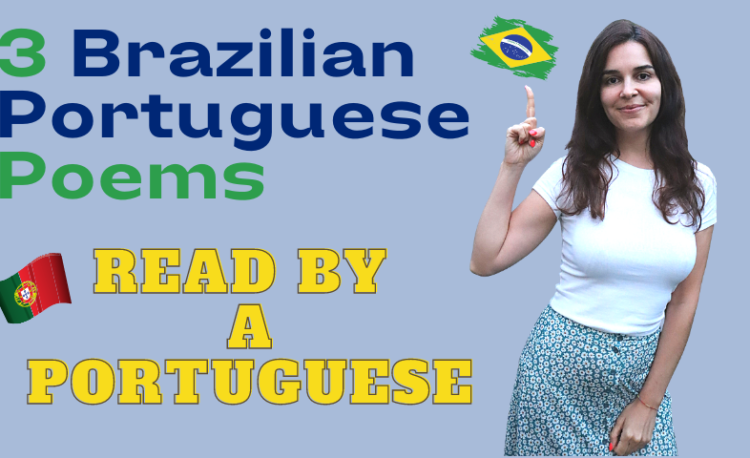 Hey guys! Today I decided to do something a little different. I’m going to read two poems that are from Brazilian authors and that are usually read in Brazilian Portuguese… but today I’m going to read them with my accent, in Portuguese from Portugal. I think this exchange of cultures is very beautiful and, bottom line, this is our language, it’s just one language…and I think it’s beautiful to have these variations and, so, I think it’s very interesting to hear Brazilians reading Portuguese poems from Portugal and vice versa.

So I hope you like it and yes… the poems I chose, I have them here today.

In the following video from my YouTube channel, you can hear me reading the poems. Below you can find then the written version and the English translation of them 🙂

The first poem is called “Soneto de Fidelidade” (Sonnet of Fidelity), from 1946 and is by Vinicius de Moraes and, yes, it is about love.

Above all, to my love I’ll be attentive
First and always, with care and so much
That even when facing the greatest enchantment
By love be more enchanted my thoughts.

I want to live it through in each vain moment
And in its honor I’ll spread my song
And laugh my laughter and cry my tears
When you are sad or when you are content.

I’ll be able to say to myself of the love (I had):
Be not immortal, since it is flame
But be infinite while it lasts.

This poem is very beautiful.

“No meio do caminho” by Carlos Drummond de Andrade (1920)

Another poem I chose was the poem “No meio do caminho” (In the middle of the road) from 1920 and it is by Carlos Drummond de Andrade and it is like this:

This poem is quite funny and curious and I think it has a little to do with the things that get in our way throughout our life. If anyone wants to say anything further about this poem, let us know in the comments below.

I am thinking, I said I was going to read two poems, but I feel like reading one more. So, I’m going to read a (part of a) third poem which is Ferreira Gullar’s 1976 “Poema Sujo” (Dirty Poem). I hope I’m saying the name well.

What does a name matter at this hour of nightfall in São Luís
from Maranhão at the dinner table under a light of fever between brothers
and parents within an enigma?
but what does a name matter
under this roof of grimy tiles exposed beams between
chairs and a table between a china cabinet and a cupboard in front of
forks and knives and plates that have already broken
a plate of ordinary crockery doesn’t last so long
and the knives get lost and the forks
are lost for life
fall through floor cracks and go live with
rats and cockroaches or rust in the yard forgotten among the lemon balm trees

If you know more about this poem, if you want to add anything else, let me know in the comments below.

If you want to learn European Portuguese in a structured and fun way and become part of our community within Mia Esmeriz Academy, feel free to check out my online school here.

I hope you enjoyed listening to me, and that you enjoyed my little “work”. And, yes, I’m waiting for your comments and see you in the next article!