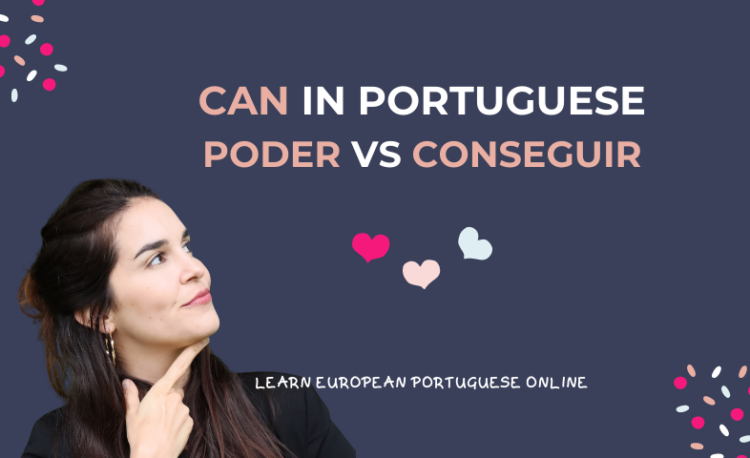 If you’ve been following my previous posts, you know I have been tackling some of the pairs of verbs that are most confusing for English speakers. Today is no exception, and I will tell you about the difference between the verbs poder and conseguir.

The difference between poder and conseguir

Both these verbs – poder and conseguir – can be translated in some contexts as to can.

However, they can’t be used interchangeably, as they actually convey different meanings.

Take a look at the following sentences:

As you see, we could translate both these sentences the same way. However, in Portuguese they mean two different things, and I would like to clarify it for you, when to use poder and when to use conseguir.

You can also watch me speaking about this topic on YouTube:

The verb poder in Portuguese

First things first. Let’s take a look at the conjugation of the verb poder in the Present Tense:

As you can see, this verb is quite irregular in the first person singular form. You can find more about it here. You can also use the website infopedia.pt to check how to conjugate this verb in other tenses.

Also, if you want to look at more irregular verbs and dive deep into the world of grammar in a fun, engaging way, check out my European Portuguese Master Course.

The use of poder in Portuguese

But now, when do we use the verb poder in Portuguese?

Take a look at this sentence again:

In fact, in here we are saying that we are not allowed to eat more. Imagine this cenario:

A five-year old boy has eaten a lot of cake and his mother tells him he can’t eat more – he is not allowed to eat more.

In this case, in Portuguese we would use the verb poder and not the verb conseguir.

So, in a nutshell, we use the verb poder when we want to speak about things that we are allowed to do or not.

The verb conseguir in Portuguese

Moving on to the verb conseguir, here is its conjugation:

Once again, take a look at the first person singular – it is somehow irregular. Don’t forget you can check this and other tenses in infopedia.pt

The use of the verb conseguir in Portuguese

Unlike the verb poder, the verb conseguir is used in the same kind of sentence, but with a different meaning.

Let’s pick the example above again:

In this case, what we are trying to say is that we can’t eat more, because there is something physical (and sometimes psychological) that is preventing us to carry out the action.

Here we could imagine that we ate so much cake, that now we are too full and we can’t physically stand eating more cake.

So, we use the verb conseguir to speak about situations when we can’t do something because it is physically or mentally impossible. Sometimes it can also be that something external to us is preventing us from doing something.

Take a look at some other examples:

Note that in the first example, we are not able to do something due to something external to us – in this case the time.

Something interesting about the verbs poder and conseguir

Before I go, I would like to call your attention for something interesting that I have recently found out.

As some of you may know, I have a 95 year-old grandma. She is a super fun lady, but this is not where I want to go.

What I want to say is that languages evolve and sometimes I catch my grandma saying something in a way that it is not the norm anymore, but that once was.

This brings me to the use of the verb poder.

While nowadays, poder is used only as to be allowed to do something, back in the days it was also used as to be able to.

So, my grandma would say:

So, basically, she will use poder and conseguir both as to be able to, but she will use only poder to convey the meaning of to be allowed to.

I just want you to be aware of this, as you might come across some older (wiser!) people that might still use it like this, and I don’t want you to be even more confused.

This is the end of our post. I hope you have enjoyed it and that it helped you clarifying the difference between the verbs poder and conhecer.

Please write a sentence in the comments below in Portuguese, using one (or both) of these verbs.

I hope you have fun learning Portuguese and I hope you are there, on the other side, for future posts.

4 thoughts on “Poder vs Conseguir”