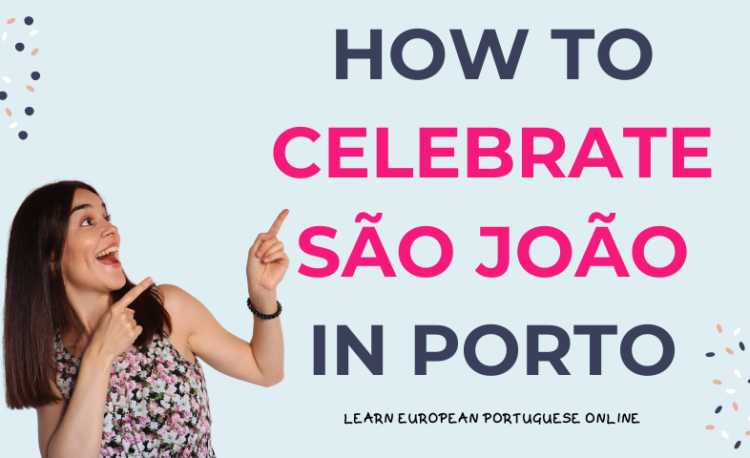 Two nights ago, from the 23rd to the 24th of June, we celebrated São João, in Oporto (or Porto). If you come to Portugal in June, this is definitely a top thing you should do – spend São João in Oporto with us! Believe me, it is the best night of the year!

So, but what is it all about? Read on and learn how to celebrate São João in Porto like a tripeiro.

The History behind Saint John’s night

The night of São João (or Saint John) is celebrated in Porto for more than six centuries and it has its roots in the pagan courtship celebrations. However, no one relates the two things anymore and people tend to think more of the celebration as a tribute to Saint John. It is so much so, that many Portuguese people think that this saint is the patron of the city, but in fact the true patron is Nossa Senhora da Vandoma, or Senhora do Porto.

On the night of 23rd of June – the midsummer night – thousands of people come to the streets in a celebration said to be one of the biggest of the kind in Europe. Equipped with garlic flowers or soft plastic hammers, the Portuenses (inhabitants of Porto) come to the streets and hit each other in the head with it, while saying “Bom São João“. There is a festive atmosphere and if you go through the streets you can see the smiles on people’s faces.

There are two typical dishes in São João. For fish lovers, you can find sardines (sardinhas) being cooked outside in every corner on this day. From big restaurants to one-person private houses, everyone brings their barbecue out and starts grilling sardines. Actually, the most common smell on São João is sardine smell. It sounds bad, but for some reason, on this day, everything seems better and this smell is received with smiles.

Besides this, for the meat lovers, pork (Febras) is also cooked in the improvised grills and you can accompany it with bread. Caldo Verde, a typical Portuguese soup, is also served in many corners of the city.

You can eat right at the beginning or during the night, as all restaurants and places are open for a long time on this day, sometimes even the whole night!

Don’t forget to go and eat Farturas – a kind of Portuguese churro – with lots of sugar and cinnamon (hey, no one said the food was healthy! so proceed with caution).

Places To Visit In Porto On São João

Fontaínhas – This is a must-go place on São João. There you can find the above-mentioned Farturas, and if you have kids they will love the carousels and other attractions that settle in this place for São João. There is also a feeling of real Porto in here, I cannot really explain why. Just go and check it out!

Avenida dos Aliados – The main avenue of Porto, also offers some entertainment during this night. For some years now, you can listen to some concerts from Portuguese singers on São João. If you like music, this is the place to be!

Miragaia – Miragaia has one of the most typical Saint John’s celebrations. Being an old neighbourhood, Miragaia sees all the real Portuenses coming there to celebrate São João and there is always a very Portuguese atmosphere in the air. From people grilling on the street, to little local concerts and people dancing with their neighbours, everything seems and feels really authentic. If you want to experience the real São João, go to Miragaia.

Ribeira – Ribeira is where everyone heads to before midnight. It is a place by the river and it is where you can see the fireworks at midnight. These fireworks are a show of light and music and they somehow add a mysticism to the night. It all seems magical! If you enjoy this kind of show, you cannot miss it for the world. There is also a part during the show, where Ponte D. Luís I (the old bridge in Porto) becomes illuminated with a light cascade. It is really nice. This year it said “S. João 2019 Porto“. Go and watch it, but be aware that there are thousands of people gathered there by midnight, so if you want a good spot, you should go early.

The Lanterns Of São João

The so-called Balões de São João look like Chinese lanterns that can be seen in the sky during Saint John’s night. All Portuenses buy these paper lanterns and lit them during the night, before launching them through the air. It seems like the skies lit up in a show of colour. It is really beautiful.

Unfortunately, these lanterns can cause some hazard, as they have been reported to lit things on fire before. Therefore, and because of the fires in Portugal during summer, last year they were prohibited. This year, however, as the temperatures did not rise too much, the lanterns were allowed again.

I guess you have to use them with caution and ask around what the policy is for the current year.

A very old tradition of São João are the quadras de São João. Every year, people write to the local newspapers their poems about this amazing party. There is a competition and writers can win prizes if their verses are chosen as the best ones of the year!

I had some family members who used to write their poems every year and won quite often, so I will share one with you now:

This poem was written by a great-uncle of mine and it means something like “Just because you jumped ahead (something like just because you are well in life), do not laugh about my destiny, the Saint John’s lantern goes so high, but you see it so small”. I interpret it as “do not think that because other people are “smaller” (poorer, less powerful, etc) than you in any way, you get to feel superior or so”. What do you think? Maybe you have a different interpretation?

Things You Must Have During São João

A powerful bladder – Ah ah, yes, it seems like a joke, but it isn’t. If you go around in São João, you will find 0 places where you can use the bathroom. You have to go around and ask, but normally the cafes and bars will tell you their bathroom is not working (a kind of a phenomenon on Saint John’s night – all the bathrooms stop working :P). Your only option will be public toilets, but the lines are normally very long so you will have to wait quite a while.

Martelo de São João – These are the above-mentioned soft plastic hammers. I do not know why we started using them, but now everyone has one and goes around hitting other people on the head and saying “Bom São João”.

Manjerico – This is a plant from the family of the basil and it smells really good! Normally, you will have one around São João and you will touch it with your hand from time to time and smell it off your hand (NEVER smell it off the plant directly, as all Portuenses will tell you off…that will not be good for the plant, or you! ah ah). Usually, you will see a little paper with one of Saint John’s poems poked on the manjerico. It is tradition! =)

Alho-porro – This is another old tradition. Before the plastic hammers, people used to bring alho-porro instead and put it up other people’s noses to smell (warning: it does NOT smell good). This is a kind of garlic plant that has a cute shape but a nasty smell. If you want to be a true Tripeiro (the slang way we call the people of Porto), though, you can always buy one and go around poking people with it.

In conclusion, São João is a must-do thing in Porto in June and I would like you to experience it at least once (just a small remark: if you do not like a lot of people, maybe this is not the thing for you). Most of all, I hope you have the opportunity to come and enjoy Porto on São João and also in every other day. This city is amazing and I think you won’t regret it =)

Check out this YouTube video about Saint John in Porto

If you want to know more about Porto, check out my other posts about this beautiful city:

Have you already experienced Porto and São João? If so, tell me all about it in the comments below. Would you like to experience it? Do you also celebrate Saint John in your country? =)

I hope you enjoyed this article and I hope to see you soon in this beautiful city in Portugal: my Porto.